board, but it's worth telling you what we know. It sounded like Faraz Jaka check-called a bet from Kyle Julius on the flop, but we just can't be sure about that or the turn action.

We do know what happened on the end, though. Julius fired out with 1.035 million into a pot of about 2.25 million. Jaka spent a long time thinking with

, even cutting the call from his stack as he gauged the reaction. Finally, though, he folded.

Julius had been bluffing with

and Faraz Jaka defended his big blind with

flop and Jaka went nowhere with second pair. After the call, the

hit the turn and Julius kept up the heat with 480,000. Another call from Jaka delivered the

river and Julius slowed down with a check. Jaka checked behind and took it down with sevens and deuces.

From the button, John Dibella opened the pot with a raise to 550,000, and he had the smallest pair of

. Next door, Xuan Liu three-bet to 1.2 million with the superior

, but the action wasn't done yet. In the big blind, Kyle Julius was dealt an even better pair, the

. He took about two minutes stacking up chips, then tried to make a cold four-bet. 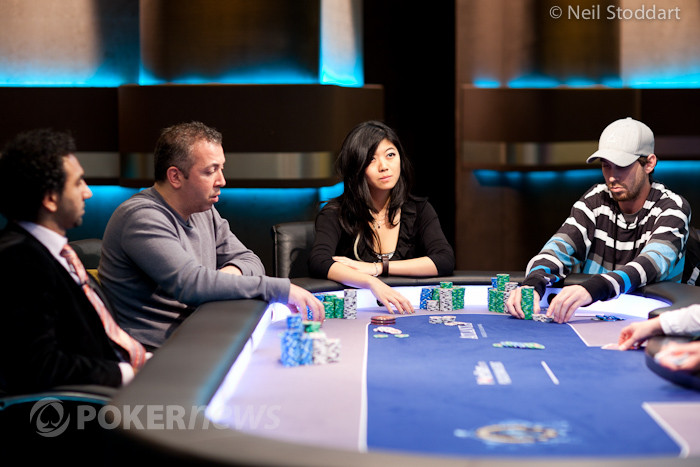 The problem was that he didn't successfully do it in one motion, and his pump fake was noticeably awkward. Liu called him on the string raise, and Robbie Thompson (who is presiding over the final table ceremonies) ruled that it would be a flat-call. It actually ended up working out to Julius' benefit, though he couldn't know it yet. Dibella called too, and there was a big pot up for grabs headed to the flop.

, and Julius only needed to bet 655,000 to end the hand and ship the pot to his corner. He couldn't help but smirk as he stacked up a big pile of chips. He's up around 13 million now.

. Liu spent a good while in the tank, but ultimately gave it up.

Our final four have reached the end of the level, and they're off for a 15-minute break.

and Faraz Jaka called from the big blind with

and Jaka checked. Liu checked behind and the