Hands #110: Bernies Bluffs It Off, Urbanovich Jumps to the Lead

Hands #15-17: Kings for Clarke and Kamatakis, Four-Bet by Bernies

and in the big blind, Bernies woke up with

. The German squeezed to 350,000 and both Clarke and Kamatakis folded.

Hand #16: Now it was time for Kamatakis getting

, and from the button he made it 120,000. Both blinds released, just a small pot with Kamatakis.

Hand #17: On the button, Gilles Bernies thought about it for some time before he raised to 125,000 with the

. Small blind Dzmitry Urbanovich had the

and Dzmitry Urbanovich defended the big blind with the

. They both checked the

flop and Urbanovich led the

. Clarke took three minutes to think about it before folding.

and after Kully Sidhu called from the small blind with the

flop and Clarke bet 125,000. Sidhu flatted and checked the

. Clarke checked and the river came the

. Sidhu led for 400,000 and after Clarke studied the board for a minute he called with the worse hand.

. Everyone folded, another small pot for Bernies.

Hand #10: From the cutoff, Patrick Clarke with the

made it 110,000. Kully Sidhu right next to him called from the button holding

hit the turn and Sidhu called.

completed the board and Clarke bet 230,000 in 630,000. Sidhu tanked for a fair bit before he raised to 730,000. Clarke wasn't too happy about it, but he did call. Sidhu instantly said the call was good. Clarke showed his tens, Sidhu mucked.

. Clarke made the call and they went heads up to an

flop. Clarke checked and Sidhu bet 225,000. Clarke called again and they both checked the

turn. The river brought the

and Ilios Kamatakis three-bet, making it 310,000 with the

Hand #7: Dzmitry Urbanovich raised the small blind to 135,000 with the

and picked up the antes and Patrick Clarke's big blind.

from the button. Kully Sidhu defended hois big blind with the

. They both checked the

flop and after Sidhu did the same on the

Urbanovich made the call with the

. Things only got worse for Jones on the

flop, and although he hit the

river could not save him.

and he took down the blinds and antes.

. In the big blind, Kully Sidhu flatted with

Hand #3: Another raise and take it in the third hand. Dzmitry Urbanovich in the cutoff, made it 125,000 holding

and took down the blinds and antes.

Who's Going to be Crowned the Next EPT Main Event Champion? 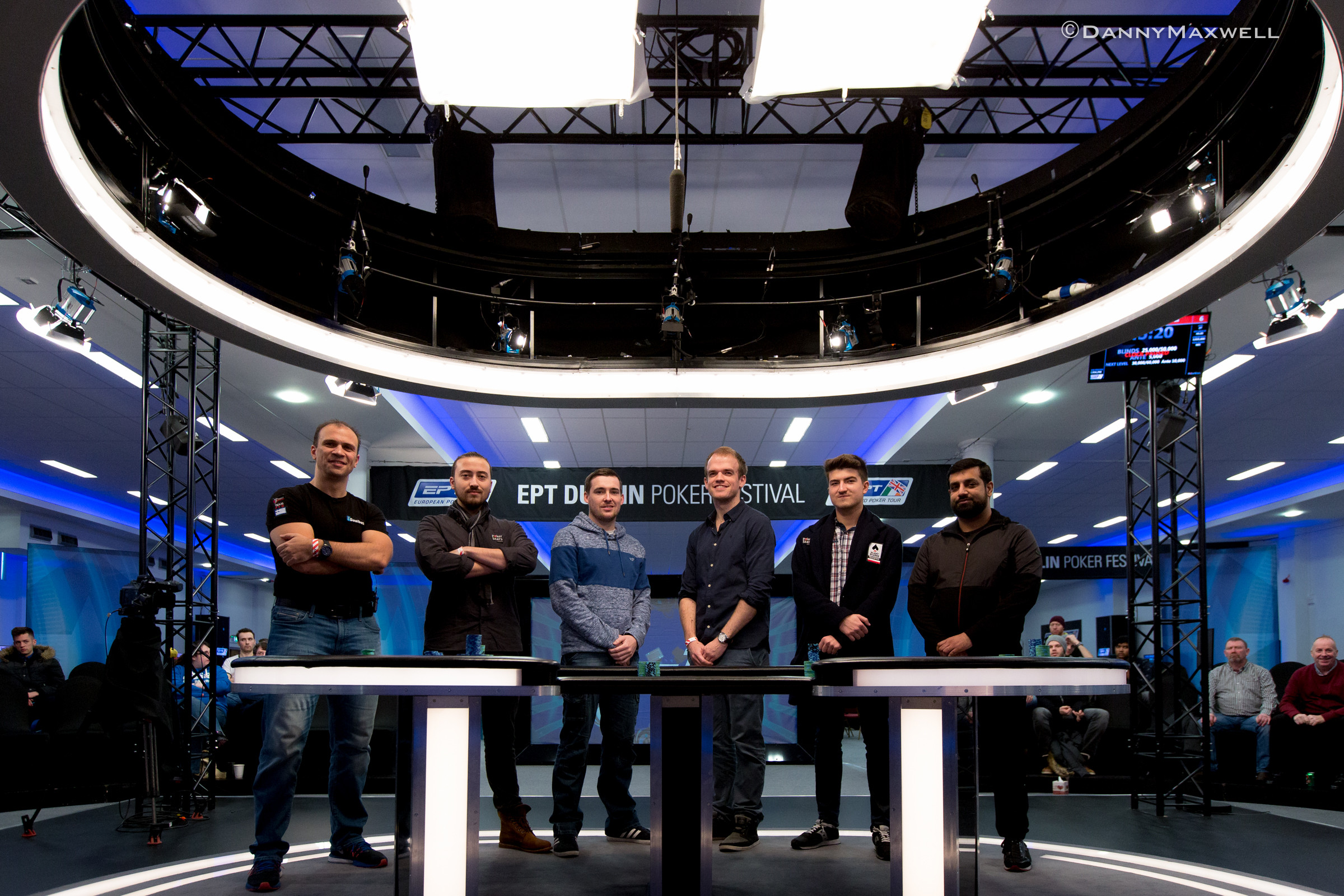 At 1 pm local time (in about an hour time), the Main Event of the 2016 PokerStars European Poker Tour Dublin will commence. The live stream and our coverage here on PokerNews.com, will start at 2 pm (in about 2 hours time), with hole cards face up.

The tournament started with 605 players, and the final 6 are already guaranteed a pay day of €119,450. All are eyeing that first place prize of €561,900 though, so there's still a lot to play for. Only 6 players are still in contention, with Polish poker prodigy Dzmitry Urbanovich in the lead with 103 big blinds. Rhys Jones is the short stack coming in with just 15 big blinds.

The profiles underneath are courtesy of PokerStars.

As an EPT first-timer, the 27-year-old German has already achieved something many regs on the tour can only dream about. He was the overall Day 1 chip leader and his run hasn't stopped since, as he marched towards the final table.

At the end of Day 4, Bernies described his run as "weird", pointing out that he's an amateur among some very well-respected pros. He’s now guaranteed to take back home at least €119,450 but making the EPT final table hasn’t changed his poker ambitions - he has no immediate plans to turn pro. Bernies is also a keen musician, creating electronic music.

If you’d been asked to describe Dzmitry Urbanovich results a year ago, his bio would have looked very different to the one we see today. Up until February last year, Urbanovich had won just over €200k in live events; since then he’s added a further €3.6 million!

Although live results tally goes back to July 2013, it was at EPT11 Malta last year when he stunned the European poker community by taking down a record four events in one festival, including the €25k High Roller. Suddenly, Urbanovich was the brightest star on the tour and many poker aficionados were eager to see what he'd achieve next. They didn’t have to wait long. At the EPT11 Grand Final, he was second (to Erik Seidel) in the €100k Super High Roller for a €1,446,000 payday, which remains his biggest single cash to date.

Still only 19 years old at the time, this massive win was instrumental in his being awarded the EPT11 Player of the Year title at the end of the festival. A superstar was born, and Urbanovich joined the likes of Ole Schemion and Steve O'Dwyer who relentlessly crush tourneys on the EPT circuit.

Urbanovich is already #1 in Poland's all-time money list with most of his $4.2 million winnings earned in the past twelve months. Here in Dublin, he's made it to his first EPT Main Event final table and this summer, he will become eligible to play the World Series for the first time, after turning 21 in May. Confident about his abilities, the youngster has already made a bet with Team PokerStars Pro Vanessa Selbst that he'll bring three bracelets back home.

He won his seat for EPT Dublin on PokerStars in a €530 NL satellite last month.