Martin Staszko had he button. He raised to five million and won the pot.

Pius Heinz had the button. He raised to 4.8 million and won the pot.

Martin Staszko had the button and limped in. Pius Heinz checked his option and the flop came down

Both players checked, landing the

on the turn. Heinz check-called 3.5 million from Staszko and the

followed on the river. Heinz checked for a third time to Staszko who after a few moments bet six million. Heinz mulled it over, but opted to lay it down.

Pius Heinz had the button and the big chip lead after that double. He raised all in and Martin Staszko folded.

Martin Staszko limped in from the button, and Pius Heinz raised to 7.9 million in the big blind. Staszko called it pretty quickly, the flop came

, and Heinz continued out with 8.2 million. The Czech was having none of it, though, and he raised to 17.5 million total, sending the decision back to Heinz. He spent a few moments thinking, then leaned back in his chair and sipped his water as he pondered. He shuffled chips for a bit, then leaned back over the rail to shoot a glance across the felt. A few seconds later, he announced his all in reraise for about 70 million total!

Now it was Staszko with the decision, and he doesn't normally tank for the camera. Indeed, the call came just a minute later, and the cards were on their backs with Heinz at risk.

"He's ahead!" Heinz's fans began to get giddy as they leaned in and gazed up at the monitors. The ace-queen was indeed the best hand, but Staszko was drawing live to the clubs and the nines left in the deck.

. Camp Heinz burst into another celebration as their guy was just one card away from a monster double. He just needed to fade Staszko's draws.

The river was black, but it was the

, and Heinz and his rail enjoyed a big celebration together.

Stasko has been forced to pay off a huge double, knocking him all the way back to 44.4 million. That gives the other 161.5 million to the German, and the tides have officially turned in one fell swoop! 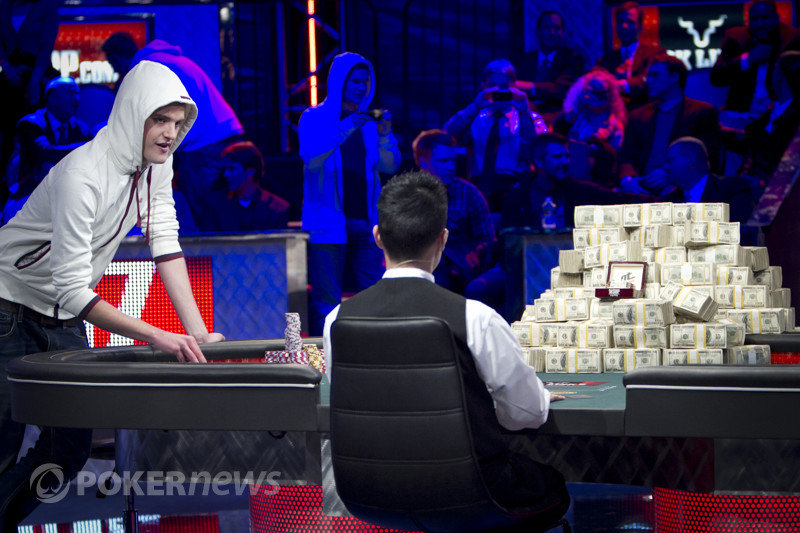 The players are now on a break. So are we. Heading out in search of food. And hopefully not beef jerky.