Cory Zeidman brought in with the

, then called a raise from Chris Bjorin and his

Bjorin bet every street he could as Zeidman was calling and check-calling the whole way. At showdown, Bjorin announced his aces and a low and tabled

. Zeidman's first four cards had given him a straight-flush draw, and his hidden

ended up making a high hand on the river.

We're back in action, and Cory Zeidman has taken the first meaningful pot. At these limits, one decent pot is all it takes to put a big swing in the chip counts.

Zeidman bet the river and was eventually called, and he couldn't wait to announce his "Kings up." They were good. Bjorin had made jacks up, and he tucked and mucked and slipped back under a million chips.

After an impromptu break so the two remaining players could use the restroom, the cards are back in the air.

It's been a long while since we've seen a big pot, but that doesn't mean the tides aren't turning. Slowly.

Chris Bjorin has drawn this match back to even, and the two men have stepped away for a quick break.

"You guys might want to go away for a couple hours. Take a nap. Come back."

Those were the words of Cory Zeidman, and indeed, this match has come to a pretty firm halt. Hardly any pots are making it past fourth street, and there's been a long string of small pots passed between the players. 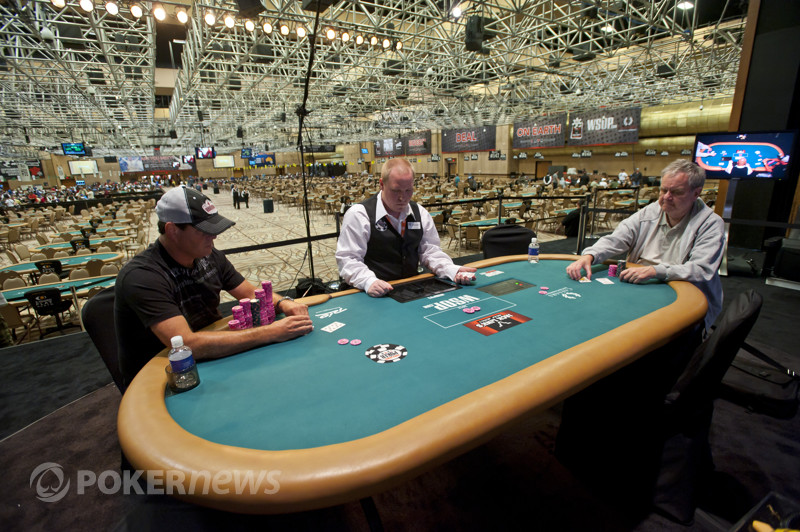 Chris Bjorin brought it in with the

, then called the completion from Cory Zeidman and his

Bjorin check-called on fourth street, then took the betting lead on fifth. Zeidman called a bet there, but he'd surrender on sixth to move Bjorin up to about 725,000.

One hand later, Bjorin brought in with the

Zeidman bet his pair on fourth, but he check-folded to Bjorin on fifth street. "That's the second time I've been rolled up today," Bjorin admitted. Mark him down for 875,000.

On the next hand, Bjorin was the one doing the completing with the

, and Zeidman called with the

After checking through on fourth, Bjorin bet fifth street as both men were showing the same hand. Zeidman called that bet, then another one on sixth street. Seventh street went check-check, too.

for trips. It looks like he's close to 1.1 million chips once again.

Brandon Shack-Harris had a rough go as he dwindled to just 170,000 before completing Chris Bjorin's bring in. The latter raised it and Shack-Harris moved in for just 10k more.

Bjorin failed to improve upon his pocket tens as the streets flew by, but it didn't matter as Shack-Harris didn't improve either and exited in third place.

We were even a little short on Cory Zeidman's count. A closer inspection reveals that he has more than 1.6 million, and he's dragging another little pot as we type.

Cory Zeidman is really turning up the heat in this level. He completed three hands in a row and won them all right there on third street. He got a walk on the next hand, and we just watched him play a little pot with Chris Bjorin shortly thereafter.

Bjorin was the bring-in with the

, and he drew the

on the next two streets. Zeidman raised third with the

. Bjorin called a bet on fourth street, but fifth was too much. A big bet scared him away, and Zeidman chips up even further.

It's hard to count Zeidman with the way he's stacked up, but we eyeball him at just shy of 1.5 million.